So Just How Does One Manifest A TARDIS? – The Saga Part 1…

I’ve wanted one since I was a little kid.  A TARDIS.

But that’s not all there is to the story.

Growing up watching Tom Baker as the 4th Doctor is somewhat integral to why I crochet.  Or at least why I continued to crochet as much as I did, the way I did, in my young crochet evolution.

It was that scarf.

I was fascinated by that longer-than-history, giant scarf of The Doctor’s.  A caricature of an otherwise mis-matched and uninteresting piece of clothing.

An exaggeration that taught me magic and got me thinking.

It’s what got me out of serious and into making fun and unusual styles of every day things, out of crochet.

“There’s no point being grown-up if you can’t be childish sometimes.”
– The 4th Doctor (Doctor Who)

I mean, after all… The 4th Doctor’s scarf is just as useful as a whip is to Indiana Jones.

But while I could make a scarf, a TARDIS was hardly within reach back then.

Today, I’ve become more and more interested in making a TARDIS of my own.  Though I have a lot of catching up to do when it comes to learning about building with wood.  It was my brother who gained knowledge of such things from my father and grandfathers, not me.

Not to mention, uh, a certain number of tools that I am missing.

I’ve read forum after forum and gathered ideas and saved pics and links.

TARDIS Builders is actually a really useful forum for people who want to share details about their projects. Similarly, the Dr. Who Scarf Support Group on Ravelry is also a great place to go for help in recreating The Doctor’s scarf.

SO.  Back to the TARDIS.  How does one manifest something so geeky, and for that matter, something rather uncommon – that simply isn’t just lying around for one to pick up and take home?

I knew I could build one (at least in theory), but I haven’t the skills, tools, time, shop, etc. right now.

Occasionally I see one at A-Kon or the like, but even that is not common place.

But I wanted one so bad.  I mean bad.

TechShop is a beautiful entity borne of The Maker Movement, and straight out of Maker Faire.

Btw, if you haven’t heard – Barnes ‘N Noble is hosting a Mini-Maker Faire event this coming weekend, November 6th – 8th.  If not a world-wide event, it’s nation-wide at least.  You should totally check it out.

And you might remember that I participated in the first two big Maker Faires that came to Austin back in 2007 and 2008.  Along with a Mini-Maker Faire in my area in 2013.  My people, I tell ya.

Maker Faire is all about the joy of simply making things on your own.  And TechShop is a membership based community workshop – complete with workspace, classes and industrial grade tools for you to make just about anything you desire with your own two hands.

Literally, anything is possible if you have TechShop in your corner.  Just ask Jack Dorsey, who made his first prototype for Square – at TechShop.

So what does that have to do with my coveting of a Time And Relative Dimension In Space machine?

A man named Paul Spracklen made a TARDIS at TechShop in Austin. 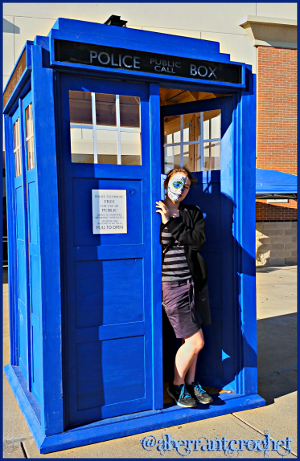 And it just so happened that he decided to silent auction it off for charity at the 3rd Anniversary Open House for TechShop in our area.

And it just so happened that the kids and I were at that open house, helping out.

And it also just so happened that I won that silent auction.

Because after all, there are a lot of things I could spend a couple hundred dollars on.

But just how often does a TARDIS cross your path, looking for a loving home?

Tagged as Doctor Who, TARDIS, TechShop

5 responses to “So Just How Does One Manifest A TARDIS? – The Saga Part 1…”