The insurance situation is frustrating for everyone… 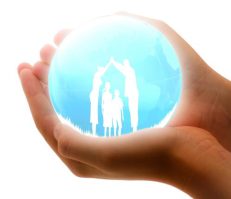 There are some things I’m thankful for now that I have experience to provide perspective.

Under current laws, my husband who was struck suddenly with a terminal brain cancer (there is no cure) cannot be denied health coverage.

I have a lot of anger over this issue, because most likely, the cause is related to his military service, but it hasn’t been proven and all responsibility is denied. And let’s face it, his area of service was not highly covered in the news. Deployment was not easy on our family. It was a destructive time for us emotionally and financially. And now, it’s happening again, only worse.

Statistics say if my husband survives another year, he will be an outlier. Extreme cancers like this are horrifying for both patients and families. There is so much you’ll never understand about something like this, without going through it. And I would never wish for you to know what any of it is like. It’s not something you wish on any human, if you are human.

And when it’s your brain under attack, it’s not like you would imagine. it’s not predictable and it is not kind about how it destroys bits and pieces of your personality and life.

Cancers like this are also orphan diseases. Less than 52,200 case of brain cancer are diagnosed per year in the US, and glioblastoma is only about 15% of those cases. Out of billions of people. I think you might have a better chance of being struck by lightning.  Unlike other diseases, there is no known cause for glioblastoma, other than a handful of connections made to certain types of radiation exposure and agent orange. Not even a genetic cause has been identified.

John has been the poster child of health, good diet and fitness for a man in his mid-40s for years. And yet he was struck with a voracious, fast killing primary brain cancer caused by a series of DNA errors. (It’s been proven to not be connected to diet. This feels very much like being struck by lightning.)

I have hated being forced to pay for things that are not useful to me.  I have resented high costs of insurance that would not cover things I wanted to do, like see a chiropractor instead of have surgery. See an acupuncturist, instead of rely on pain meds (most of which I’m allergic to anyway). Etc.I have not wanted to be forced to pay for something that in my estimation is not in my best interest.  Overall, I believe insurance should be more for catastrophic situations and less for managed care.

However, I do believe that insurance *should* cover things like what is happening to my husband. Because no one understands why some of these things happen. They can’t be foreseen. They can’t be predicted. They’re not even understood at any level. There are no known causes. It literally could be you next. It really, literally could be you. There is no telling where the dice lands next.

Insurance is supposed to help hedge the impact of extreme situations, because illness (and accidents) like this damages communities. It doesn’t just take down a person, or even a family. It takes down an entire sector of what used to be a healthy, productive circle of society.  Car accidents happen, and no one wonders if these should be covered. But being struck with an extreme disease that has no known cause or cure? And we question it?

Everyone who ever depended on John is suffering. He was not a small fish who had little impact on the world. He led and saved so many men and women. Both in duty and on his own time. As recently as New Year’s week, when we were on our 20th wedding anniversary trip, he saved a woman and her dog from an elevator during a snow storm and blackout. We didn’t know it then, but his brain tumor was forming by then. And John, as always, did the right thing. He has always protected and served and with a laid-back spirit and wry smile.

If insurance was allowed to deny him coverage because he’s been diagnosed with a terminal illness, not only does it mean his death, likely in 3 months or less, it means an incredibly torturous death. No one can reasonably agree that this would be a right thing to do.

So I must admit, these are perspectives I never had before. As we all argue over required insurance, coverage laws and costs. All the money we overpaid in our lifetime pales in comparison to the fight we’re in now. As to Obamacare policies, I have learned that many deny treatment at some point. Even Medicaid and Medicare denies treatment past a point to many GBM patients. We’re paying for Cobra so John can continue with treatment from a genuine brain cancer center, not just a generalist who knows very little about his cancer.

There are problems everywhere with no perfect solution. But I thank God for insurance coverage right now.

3 responses to “The insurance situation is frustrating for everyone…”