May is Brain Cancer Awareness Month 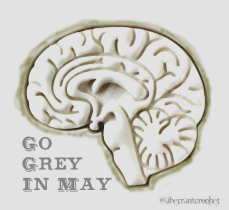 I just want to say that I am truly grateful for everyone who checks in on John and I.

Things have not been so great lately. And I’ve been really struggling this week. Some of you drop in virtually and I appreciate the nudges. They help steady me when I feel so dizzy sometimes. And because it’s been so chaotic and emotional, I haven’t been able to wrap my head around writing very much.

John’s glioblastoma has been on the move. The first signs appeared with the New Year. And his GBM never fully disappeared in the first place. He went through a flurry of uncontrollable seizure activity and blood pressure issues in February and March. I actually think it was the uncontrollable blood pressure that was causing the seizure events. Then his liver enzymes started getting too high in February, so they were discussing pulling him from the Lomustine (CCNU) because they wanted to give his liver a break. However, MRIs in early March confirmed that the GBM had become resistant to the Lomustine. So that cinched it. It’s no longer a viable treatment.

John’s NO team decided that the best course would be to do 4 more weeks of radiation to the brain, and continue with Avastin, so that his liver could take a break and then regroup after for a new chemo. Avastin has been shown to offer protection to healthy brain tissue (but not cancer) during radiation. You can’t fight active GBM successfully without a multi-pronged attack. So it definitely seemed like the wisest route. That way his liver could recover and we could see how another chemo would do after that. It was worrisome though. Radiation combined with Temodar did not hold back John’s GBM last time. Wasn’t sure Avastin combined with radiation would this time either.

Unlike last time though, John had nausea and vomiting during this recent round of radiation treatment. He lost his strength and even started to lose feeling in his right hand, arm and foot. And he experienced more uncontrollable blood pressure and seizure events. So while he was receiving the radiation, they also changed up his blood pressure and anti-seizure medicine. And they added meds for the nausea. It took about a month, but it seemed like the new blood pressure and anti-seizure meds were a great improvement and his tremor and other seizures stabilized.

As predicted, John’s liver enzymes started to decline. While the radiation symptoms were pretty awful, it seemed like his liver was recovering as hoped. In talking to other wives of GBM patients who receive a 2nd round of radation, I learned that for most of their husbands, if they lost use of one of their hands, it came back generally within 3 months. John finished the radiation about a month ago. There has been some improvement in the feeling in his hand. It’s not back yet, but we hope this is a good sign.

A week after he completed radiation, John’s liver enzymes shot up, nearly quadrupled, for no explainable reason. He hadn’t had a dose of chemo in 2 months, and the enzymes had been coming down. But suddenly overnight the enzymes skyrocketed. They ran every test they could think of and he was negative for everything. It didn’t make any sense.

So next came CT and MRI. They found what appear to be 2 small tumors, at 1 and .7 cm in size, on his liver. And because of that, he’s been pulled off of all brain cancer treatment, waiting for a biopsy to be done and for those results to come in. Of course, everyone’s worried that the spots are cancer. There was a mention in the MRI notes that there were some unusual blood vessel formations. I hold out hope that maybe these 2 spots are more weird knots of blood vessels. And that they figure out what’s distressing his liver. Nothing about the liver distress makes sense.

The biopsy is this week. And it will take 3-5 business days to get those results back. Meaning John will not even receive Avastin before the end of next week. Avastin is not like typical chemo, as it’s an anti-angiogenic. It helps starve the GBM, reduces brain swelling better than steroids and overall improves quality of life. But he will have gone a month without any protection from GBM by then. And the swelling caused by the radiation is no small thing either.

GBM can double in size every 2-4 weeks. And John’s last ABTI/MRI showed multiple seeding areas of his left brain, possibly trying to move to his right brain.

Regardless of whether he has liver cancer too, which is so super incredibly rare in GBM cases!! the glioblastoma is faster. But there are 1% of GBM cases where it becomes gliosarcoma. Needless to say, it’s worse than regular glioblastoma.

It’s just all so crazy.

And I’m struggling. I want to be positive. But it’s scary and it hurts. Deeply through my soul, piercing lifetimes of my heart.

John had 68 different appointments with oncology teams between February – April  alone, 52 of which (plus an ER visit) in Feb/Mar. Every bit in effort to save his life, and unlock the key to GBM. It’s what it takes with this cancer. If you want to live, you don’t relax. You don’t pick the easiest path. You get your ass on the road and you go. You ask every question and figure out how to meet your doctors half-way. Because they can’t do everything. You gotta be interactive or it won’t work.

And there’s so much more than just that to do. I can’t seem to keep up. Our kids help, I barely sleep and it’s still not enough hours it seems.

And all I want to do is be with my love. Not chase papers and run errands. Capture every moment. Go out to lunch and see a movie.

But crowds and sounds cause him pain right now. He’s so tired and his headaches are getting worse. He can’t help me right now.

Dear God, I love him so much.

It’s been 14 months and I still cannot believe that this is happening to us. Or that it’s been more than 3-4 months.

There are some bright spots of hope though.

John’s recovering from the stroke. It’s taken time, but the quality of his communication (with the apraxia and aphasia) is improving. Except when he’s at his most tired. Which is a lot lately. But still, the quality of his conversation is markedly different today than it was 6 months ago.

Also, our family attended the bi-annual Together in Hope Brain Tumor Conference that MD Anderson puts on for patients and their families. It was an amazing gathering of information and people within the brain tumor community. And we met other families and survivors there. The trip was difficult for John, he really didn’t feel well. But it was so good for our family.

And, John’s NO team is trying to get Optune for him. I don’t know if insurance will cover it or not. Or if he’ll receive it fast enough. But hopefully we’ll know something about that by end of next week. Optune is promising, but I have no idea if the biopsy this week could change even that. But we met a 4.5 year survivor a the conference, who’s on Optune.

So there are things to hold onto in this upside down twist of events.

I hope and I pray that somehow, this crazy set of circumstances is a divine plan to get John the treatment he needs. And that the Optune works and allows him to live a normal life. Allows him to recover. The brain is amazing. Given enough time and proper therapy and exercise, it can recover nearly every skill it’s lost. If we can get ahead of the GBM.

I finally put together a Facebook page for John and our fight against glioblastoma. It helps to tell our story a bit better in bites than I can on my blog here. If you would like to follow along, you can find that page here.

Thanks for listening. Lots of hugs. And stay safe out there y’all.

Filed under Friends and Family, Glioblastoma