We Rocked Halloween This Year – Photos Or It Didn’t Happen

So I figured you might want to see photos of what we did for Halloween this year.

If you’ve followed my blog for any length of time, then you already know my Halloween obsession with spiders and crochet spider webs.  Ah, but I did much more this year. Much. More. Mwahahaha.

See, I’m not just mad about crochet.  I also happen to be mad about Doctor Who.  (I grew up with Tom Baker for a hero.)  And well, I have a new house, with a TARDIS blue door now.  So you know it was meant to be.

If you don’t know who The Doctor is, I’m sorry.  You must go on your own pilgrimage and find out.  It is not a journey someone else can take for you.  But for those of you Who know, and are awaiting the blue box rapture, I present testaments.

First, the homage to Grandmother Spider and her crochet webs of glory.

I finally found and unpacked the rest of my webs this year.  And giant spiders.  It’s hard to see everything from the street, but here’s my yard.  There are many much smaller spiders everywhere too.  Oh and the largest spider, to the right side of this photo, is at least 6 feet in diameter.  To give you an idea. 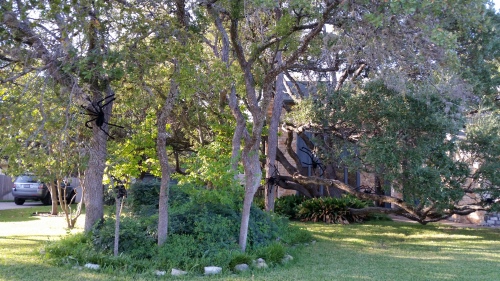 Here’s a closeup of one of my crochet webs near the sidewalk.

Next I glued rare earth magnets to a bunch of plastic spiders and put them on my front door.  Inside and out.  And added more spiders on every other metal door in the house.

And then I did this.

Sorry, taken at night, but that’s glow in the dark chalk. And that’s cool. 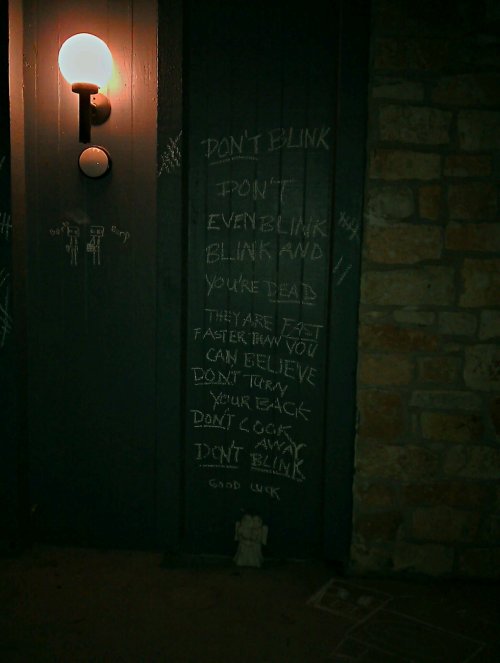 I had trouble finding an angel in my budget. At all. Not even cheesy ones.  But then I found this cute little pair at a local thrift store.  Ripped off the plastic plant and fake pearl bow glued to it and voilà, I give you terror.  Someone added a MineCraft pig nearby.  Not sure which kid from last night’s party, but it’s all cool. And delightfully geeky.

Yesterday was the teens’ party.  Tonight we’re hosting the family/adult party.  Everyone’s downstairs playing Cards Against Humanity and I’m the designated driver so a few could stay longer than their better halves could.  Which is probably a good thing.  Because it’s 20-some minutes to midnight and I might have missed out on…..

Yes, my friends… it is here.  And just in time to kick my ass.

Two years ago when we were moving, I had delusions of finishing the challenge.  As soon as moving from one house to the other began, I was a goner.  Last year, I was determined not to let a broken ankle keep me out of the race.  And of course, I won my challenge.  Aside from the year we moved, I’ve accomplished my challenge every year.

This year is different.  I’m actually not too confident.  A lot has happened to keep me from writing.  Not because I didn’t want to write.  In fact I crave it.  But because it wasn’t possible.  Such an odd year.  And my routine is so different now.

And not to mention… one of my babies is getting ready for college.  And there’s a lot going on with that this month.

Not fair.  Too soon.