I had to kill some time today while getting my laptop looked over at a repair shop.  Seems my fan is about to go.  I thought it was flat-out dead at first, but it’s come back to life a little bit.  In its death throes for sure, but for now, zombie fan is spinning. 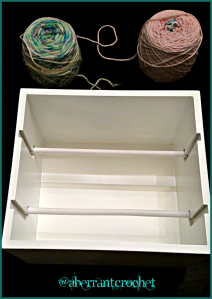 So while I waited for the tech to look things over, I headed over to a nearby closeout store to look around.

I had hoped to find some bath sheets, but instead I found something (almost) better.  I found a promising crochet helper/enabler.

It’s a “ribbon storage box” for ribbon spools – you know – for a wrapping paper station.

But I took one look at it and thought YARN.

I use multiple yarns in almost all my projects.  It’s rare when I don’t.  Projects like my 5 Foot Leaping Deer Tapestry or my CLF Flaming Hook are extreme examples that required multiple balls of yarn to be attached and going in the same project in each row.

My Flaming Crochet Hook design for the CLF First Ever Book

Mostly because they were a mix of tapestry and faire isle techniques. (Read my Ravelry notes linked above.)

But even my simple projects like my version of my Grandma’s potholders use multiple yarns together and apart, depending on the look I want.

Potholders by Aberrant Crochet and Grandma

Wrangling all that yarn for a single project can get, well… “less than neat” shall we say.

So I’ve looked into ways to control the yarn I’m using.  For like ever.

And aside from maybe the one large deep floor vase that was really heavy weighted that I used for a while until it broke, I wasn’t too satisfied with any of them.  Nice ideas, but in the long run just not enough help to justify the problems they brought to the table.

Friends have suggested I try things like this DIY Yarn Holder made from a toilet roll stand.  I just want to laugh, because if I can pull over a kitchen chair with what I do, a toilet paper stand that hasn’t been concreted into the ground hasn’t a chance. It might work for someone using just one lace weight yarn, or for a slower crocheter than I, but not for me.

I’ve had some thoughts on designing something, but haven’t had the time to give making something a try (yet). 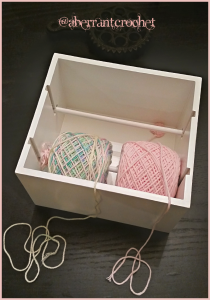 So today when I found the ribbon storage case, I saw opportunity.  Because this has spindles already to go.  This is a smooth painted box, ready to go.  And with just a look, I could tell that this would be perfectly sized for my cake balls (talking about yarn here for the uninitiated).  And with some modification, it might even work for my hand-wrapped balls too.

So I grabbed a couple cakes and voilà! I tested the spindles a bit.  They seem to hold. The box is sturdy and weighty.  Guess it might work!

The cherry on top?  It was $4 on clearance, at the closeout store.